A few dolls were made during times of war . They were probably made to be purchased for children who had relatives in the Service.

One company, named Freundlich, was based in New York and made a series of composition military dolls in 1942. They all had molded hats. 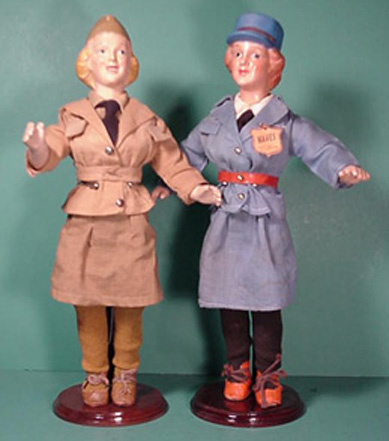 This WAAC doll and WAVE doll are two examples by Freundlich. Note the shapely figures, which predated the Barbie dolls by many years. 15" tall. 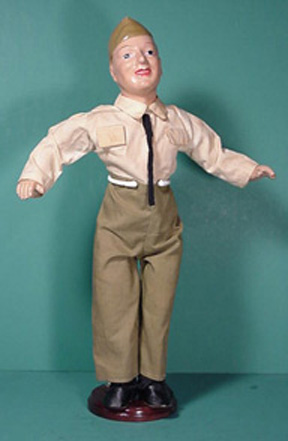 General Douglas MacArthur was a portrait doll , 18", by Freundlich

Skippy was made in 1929 by Effanbee. Even comic strip characters joined the Army. He's been redressed, only his shirt is orginal.

This doughboy doll is in fantastic condition; and he comes to me with a wonderful story. He was found in the wall of an old home, while it was being renovated. He was probably placed there by the child to whom the doll belonged, many years ago. He's an unmarked composition shoulder head doll.

A Doughboy called the Liberty Boy was made in 1917 by Ideal.

This doughboy has an illegible marking on the back of the shoulder plate, but he was attributed to Georgene Averill by the lady from whom he was purchased.